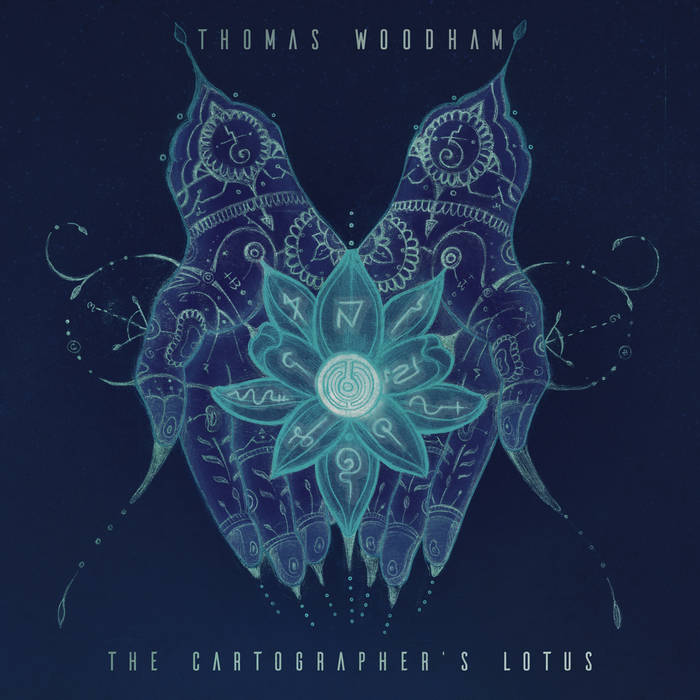 The Cartographer’s Lotus’s central theme is exploration in the most fundamental sense of the word. Taking thorough inspiration from a wide amalgam of sources such as science fiction, Islamic mysticism, and biodiversity, this album takes the listener on journeys far outside the boundaries of imagination both within and beyond the mind. Each track uses elements of human curiosity, ecstatic adventure, and formative introspection to create new landscapes, timelines, identities, and worlds. Although the tracks are unique from one another, they share a common sense of outer-ness and the humility and new insight which is concomitant with being a stranger in a strange land.

In order to create a varied and dynamic soundscape, many instruments from around the world were used in the making of The Cartographer’s Lotus. Tracks 1 and 2 use a mix of sounds from the Arab World, Turkey, and Persia such as the bağlama saz as well as ethereal vocals from Asja Kadric, a Hans Zimmer-collaborator, to inspire a feeling of mysticism and self-discovery. “Southern Wonder” uses a typical bluegrass assortment of instruments and the Chinese erhu to generate a new image of beauty from the American South. Track 4 takes inspiration from African futurism and infuses polyrhythms and percussion instruments with grand cinematic movements. Tracks 5 and 6 take a darker turn while maintaining a widescreen atmosphere. “Exegess” employs powerful compositional elements from Human Centerpiece, and “The Outsider” broils with musical complexity and instrumentation. Odd meters and key changes continue to a peak on Track 7 with Elleodin, who masterfully adds candid and passionate counterpoints to the song’s chaos. Finally, the album resolves with a reflective and transcendent piece whose central theme is personal growth, called “Kintsugi.”

Visual artists Cam Brooks and Lara Mason collaborated on the cover based on the guiding principles of The Cartographer’s Lotus. The cover features a device—half organic, half technology—which when operated, transports the user to alternate worlds and realities. The glyphs on the lotus’s leaves must be applied on the users body as coordinates via a process similar to henna. Such a fusion of real and unreal, organic and synthetic, resonates with the overall sonic structure of the album: a fusion of real world sounds and unreal synths.

Drawing stylistic influence from artists such as Dead Can Dance, Tool, Niyaz, and Hans Zimmer, The Cartographer’s Lotus shows a new level of refinement and maturity in Thomas Woodham’s creative voice. Although this release is quite adventurous, it still falls under the downtempo umbrella at Aviary Night, a home for cutting edge downtempo, ambient, and future garage.

Track Name: Lisan al-Ghaib (feat. Asja Kadric)
Surran novaye ba chunna so
Vülgo khomse sozay a cho
Golüren birr say na
Golüren shon na birr
Yulosh gomesh ba biyim to
Track Name: Eternal Zikr (feat. Asja Kadric)
Melange of essence, we ever yearn
Vapor rising in storms of desire
Together in rapturous union we burn
We breathe in the ashes of our vanity
We perish in the eternal fire
of the beloved's dream
Track Name: Thomas Woodham and Elleodin - Terfyn Eira
The view from up here is deadly
Not like you, not like this
I would soar wrapped up in your wings
And if I fall,
Let it,
Let it be

Let it,
Let it be

Bandcamp Daily  your guide to the world of Bandcamp